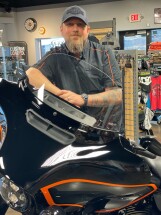 Chris began as a California native.  He lived for a short time in Seattle, WA with family before going to Silver Springs, NV which then led him to Twin Falls, ID in 1989 where he stayed until he became part of the Gold Rush team here in Elko, NV.

Like many of us in the sport, Chris started riding dirt bikes at a young age and as he got bigger so did the bikes.  The favorite dirt bike had to be his Montesa 360. As for the street as long as it has a bar and shield on the tank, it is all good.

Chris started with our dealership family at our Twin Falls location before making the leap to Gold Rush.  His experience in the automotive industry before joining us makes him a great addition to our team. 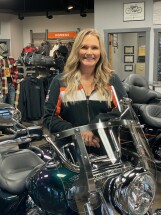 Trace was originally an Idaho native, born in Boise Idaho, and moved to central Nevada (Round Mountain) at the age of 12 where she grew up.
Here work background is Human Resources in Mining and Medical as an Advanced EMT and Medical Assistant, so when she was asked to join the Gold Rush team she was a little worried about making the transition. She faced the challenge head on and has become a valuable member of our team and has found a bonus family between Gold Rush and Snake. Her favorite pastime is watching her boys (husband & son) race motocross, riding the Harley with her husband and spending time with her children and grandchildren. 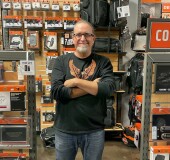 Jon joined the Gold Rush team in 2021 and enjoys forging relationships and sharing the love of H-D with customers in Elko and the travelers stopping to share their experiences.